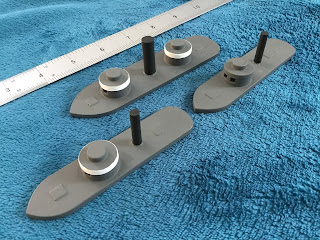 Despite my best efforts to the contrary these are quite simple to build! There is little one can do with an ACW monitor in terms of super detailing but they are quite imposing all the same. These are (from the top) the USS Senator, the USS Hiawatha (with the white turret band) and the USS Pocahontas - all of which are currently serving on the Missenhitti River.

I know I said that the first time you would see these would be in action but I was feeling pleased with how these came out and so thought I would share them!

The hulls are pre cut 3mm thick MDF from Warbases with the large hull being 5” by 1 1/4” and the smaller 4” by 1”. The turrets are 20mm across and are made up in a laminated style of three sections - the middle of which has indentations for two gun barrels. I have not added the muzzles as the weapons in question are inboard for loading purposes. The pilot houses are 10mm circular bases again, 3mm thick. the funnels are cut from dowel rod - 8mm and 5mm thick for the large and smaller funnels respectively. The deck hatches are 1/4” square and are cut from the lid of a magazine tub! They are painted overall Humbrol Matt 79 with acrylic black for the funnels and white for the turret bands. The models merely need a coat of varnish and the flags to be complete but as yet I have not organised the latter!

Next up will be the Confederate opposition and I hope to have these completed in the next day or so.

They look better painted, and have the sort of simplicity that was a feature of the US monitors.

I’m sure that the casemate ironclads will look equally spiffing!

Many thanks old chap! I am rather pleased with them and have honed the construction technique which means they are now even easier to build.

The casemates are next and then into battle!

Cheers old boy! To be fair it would be a struggle to get these wrong as their lines are so simple and uncluttered. Overall I think they look the part and I enjoyed making them which is the main thing.

On with the Casemates!

They look great and I must admit that I love the simplicity of the designs and of your models too. I look forward to seeing the opposition and with them all flagged up.

They turned out OK and I am pleased with them. I still cannot believe how much hassle I had building them and the Rebels ships but I guess it was down to being out of practise.

The flags were something I thought I had in stock but no! Luckily for now identification will not be too much of an issue!